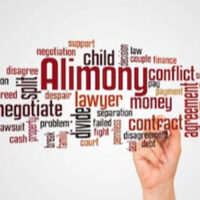 The law severely restricts the times when the court can treat you like a criminal when you have not been convicted of a crime.  In some criminal cases, the judge will refuse to allow the defendant to post bail if there is a substantial risk that, before the trial, the defendant will flee, tamper with evidence, intimidate witnesses, or commit a violent crime.  In a divorce case, there are several situations where the court micromanages you in ways that suggest that it has already decided that you are guilty and untrustworthy.  When the court awards alimony, it can order one or both spouses to work in certain professions and can even garnish your paycheck so that you only get the money that is left after your ex-spouse gets their share.  That is not even counting civil and criminal contempt orders, where the court can make you pay additional fines, and even send you to jail, if you don’t pay.  When the reason for falling behind on your alimony payments is genuine inability to pay, the result can feel downright Kafkaesque.  If your ex-spouse and their lawyer keep threatening you with punishments, a Palm Beach County alimony lawyer can help you persuade the court that the problem is not with you but with the alimony award.

When Robert and Susan divorced in 2011, the court ordered him to pay her $5,500 per month in alimony; the payments were due on the first day of every month.  By all accounts, Robert made every effort to meet his obligations; for seven years, he kept up with his alimony payments even as he endured financial hardship.  He sent $5,500 to Susan on the first day of every month, even when it meant declaring bankruptcy, maxing out his lines of credit, borrowing money from family members, and falling behind on his home mortgage payments.

On June 1, 2018, Robert could not pay.  He made a partial payment on June 4 and another on June 5, for a total of $3,500.  By the end of the month, Susan had taken him back to court and asked to have the court hold him in civil contempt; the contempt order did not even contain provisions for purging the contempt, making it resemble a criminal contempt order.  At the contempt hearing, Robert showed evidence that his failure to pay was not willful and of his extensive efforts to comply with the court’s orders, even in a difficult financial situation.  The court remanded the case for further proceedings, which, one can hope, resulted in a downward modification of Robert’s alimony obligations.

A Boca Raton alimony lawyer can help you avoid the worst punishments if your ex-spouse claims that you are refusing to pay alimony, when the truth is that you are unable to pay.  Contact Schwartz | White for help.