Beware Of Loopholes In Prenuptial Agreements 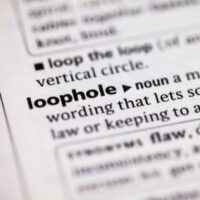 If you and your fiancé can talk calmly about prenuptial agreements, that bodes well for the prognosis of your marriage.  If you can easily agree on what you want the terms of the prenup to be, or even just on what your motivations are for signing the prenup, that is even better.  At their best, prenuptial agreements can prevent probate disputes, stepparent drama, and even divorce.  The mere existence of a prenup does not always mean that your divorce will be painless, though.  The family courts of Florida have ruled on plenty of divorce cases where the couple disagreed on whether the prenup was valid or on how to interpret the prenup.  Even if you and your soon-to-be-spouse think that you know exactly what you want your prenup to say, you should still have a lawyer review it to make sure that this is how the court will interpret it.  A Boca Raton prenuptial agreement lawyer can help you ensure that your prenup prevents conflict instead of causing it.

When Prenups Don’t Have All the Answers

Fran and Rudy signed a prenuptial agreement before they got married.  Fran already owned a house when she met Rudy, and the agreement stated that, even though the parties would live together in the house, it was to remain Fran’s separate property.  If the parties divorced, Fran would reimburse Rudy for half of the mortgage principal paid during the marriage, as well as for “capital improvements” made during the marriage.

The parties lived together in the marital home for 13 years and had two children together.  They built a swimming pool and guest house adjacent to the marital home.  During the divorce case, they disagreed about how to interpret the meaning of “capital improvements.”  Rudy argued that the phrase meant that he was entitled to half of the amount by which the value of the marital home had appreciated during the marriage.  If his interpretation was correct, this would entitle him to a lot of money, because the additions to the house increased its value considerably.  Fran argued that the phrase meant that she only had to pay Rudy half of the amount of money the family had spent on building the additions.  The court sided with Fran and only ordered her to pay Rudy half of the money the couple had spent on home improvements and mortgage principal.

If you own real estate property when you go on your first date with your future spouse, this is reason enough to sign a prenuptial agreement.  No matter how good your intentions are, and no matter how much you and your fiancé trust each other, you should go over every clause of the prenup before you sign, so you can be sure you know what the prenup will or will not accomplish.