Can You Get Alimony If the Court Decides That Your Marriage Was Not Legally Valid? 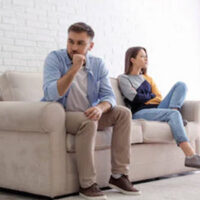 It is a shock, to say the least, if you go to court to get a divorce, and the judge tells you that you were never legally married to your spouse in the first place.  The reasons that the court might decide this are various.  In some cases, the court might rule that, unbeknownst to you, your spouse’s previous divorce was not final when your spouse married you, which would make your marriage legally invalid.  Sometimes it comes down to splitting hairs about the meanings of terms like “marriage,” “domestic partnership,” “divorce, and “annulment.”  A complicating factor in some cases is that the instant marriage, or prior marriages and divorces, took place in foreign countries, and the Florida court must decide how to apply the foreign courts’ actions to the Florida divorce case.  For other couples, things get complicated when the rulings of civil and religious authorities do not match up.  If you are planning to divorce and wondering whether the court will recognize the validity of your current marriage, contact a Palm Beach County divorce lawyer.

In 2000 in Virginia, Blene was going through a divorce from her second husband, and Binor was getting divorced from his first wife.  Blene and Binor began their relationship and moved in together before either party’s divorce had become final, and their twin babies were born in 2001.  In 2002, when their previous divorces had become final, they decided to formalize their marriage.  In accordance with Binor’s father’s wishes, a Muslim imam officiated the couple’s religious marriage, with Binor’s father and uncle acting as witnesses.  According to Blene, she and Binor agreed that he would obtain a marriage certificate from the Virginia court.  They did not get a marriage license from the court before their marriage to each other, although both parties had done so in their previous marriages.

The family moved to Florida, where Binor worked as a radiologist and Blene was a stay-at-home parent.  They enrolled the children in a private school that included grades kindergarten through eighth grade.  In 2007, Blene filed for divorce in Florida and requested alimony, and Binor argued that the parties had never been legally married.  The court ruled that, since the parties had never obtained a marriage certificate for their marriage to each other, despite having done so in previous marriages, their marriage was not legally valid, so Blene could not receive alimony.  It did order Binor to pay child support, though.  It also ordered him to keep a life insurance policy with the children as beneficiaries and to continue paying their private school tuition, as they had always attended the same private school, and he could easily afford to continue sending them there.

A Boca Raton divorce lawyer can stand up for your rights in ending your marriage relationship even if United States courts have never formalized your marriage.  Contact Schwartz | White for a consultation.