Consequences of a Domestic Violence Conviction in Florida 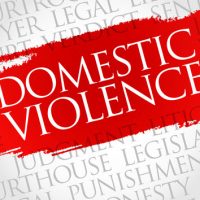 Victims of domestic violence are understandably concerned about what happens to their attacker and what potential consequences they are facing. It’s important to point out that if you are in immediate danger, you should call 911 and go somewhere safe. Domestic violence victims don’t forfeit their rights to property or the home by fleeing an abusive situation. This will not be held against the victim during a custody or divorce case.

Florida Statutes 741.28 categorizes domestic battery as the intentional and actual striking or touching of another individual without his or her consent, and the person is a “family or household” member. Specifically, domestic violence can be:

The statute defines a family or household member as spouses, ex-spouses, members related by marriage or blood, anyone living together as a family currently or in the past, or people who have a child together.

What Happens When the Police are Called

Domestic violence charges are serious and can have lifelong consequences for the alleged offender. Once the police are called in Florida, it means someone is going to jail. The law is specific that any domestic violence disputes be treated as a criminal matter. And, any allegation of violence within the household or family will be treated as domestic violence. This starts the prosecution process even if the victim ultimately decides not to press charges.

For other criminal matters, the victim has a right to decide whether to press charges or not. With domestic violence, the State Attorney’s Office is the one who makes the ultimate decision on whether to proceed with the matter or not.

What an Offender is Charged With

In Florida, offenders are not charged with domestic abuse. Domestic violence is added to create enhanced charges on top of criminal charges like assault or battery. For a domestic battery, it is a first-degree misdemeanor with a $1,000 fine and up to one year in jail, or 12 months’ probation.

Crimes with an added domestic element have additional penalties, including a 26-week Batterer’s Intervention Program (BIP), added community service hours, and a loss of certain civil liberties like the right to carry a concealed weapon.

How a Conviction Affects Child Custody

If there is evidence of domestic abuse, a judge will generally deny custody to that parent with the assertion that granting custody would be detrimental to the child. It does not have to be a conviction either, a judge may factor in allegations and/or charges when determining custody. A judge an also make determinations based on prior convictions, especially anything to do with kidnapping, sexual abuse, lewd behavior, etc.