Divorce And Monetary Gifts To And From Family Members 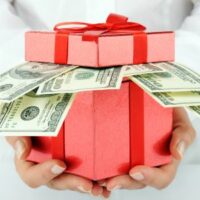 Two of the most common sources of conflict in marriage are money and in-laws.  Meanwhile, plenty of married people give money to their relatives on one or the other spouse’s side of the family, or even on both sides of the family, if they can afford to do so.  Likewise, financially comfortable seniors often give money to their adult children, even if the recipients are married.  As long as things are going well between you and your spouse, the flow of cash to and from the couple and their extended family is none of the court’s business.  Family members can give each other as much money as they want to (the annual gift tax exclusion notwithstanding), and it is up to each family whether to consider the transaction a gift or a loan.  When couples get divorced, the money they give to or receive from family members can make equitable distribution more complicated.  If monetary gifts within your extended family are a point of contention in your divorce, contact a Boca Raton divorce lawyer.

Is It Marital Misconduct If You Give Money to Your Parents Shortly Before a Divorce?

Florida law defines marital misconduct as intentionally dissipating marital assets during the last two years before a divorce filing, so that there will be less marital wealth subject to equitable distribution.  A few months before Firuza filed for divorce from her husband Ratko, he sent $80,000 to his parents in Croatia.  The gift was equal to about 20 percent of the couple’s total assets.  Although she had known about the gift and consented to it, Firuza alleged during the divorce that it was marital misconduct (so the court should include the value of the gift in the marital assets subject to distribution) because the marriage was irretrievably broken at the time of the gift.  Ratko disagreed, saying that he was making a sincere effort to resolve his differences with Firuza at the time of the gift, and he was blindsided when she filed for divorce several months later.  The court sided with Ratko.

Do Monetary Gifts Count as Income for Equitable Distribution Purposes?

Another point of dispute in Firuza and Ratko’s equitable distribution case was the gifts Firuza had received from her parents and siblings throughout the marriage; over the course of the marriage, the total value of the gifts was over $400,000.  Ratko wanted the court to count these gifts as Firuza’s separate income when determining alimony and child support.  The court refused on the grounds that predicting that Firuza will receive future gifts from her family is pure speculation, as her family is not legally obligated to gift her X amount of money each year, the way an employer is obligated to pay an employee pursuant to the employment contract or a trust is obligated to disburse money to a beneficiary.

A divorce lawyer can help you if you depended on your parents during your marriage and will likely continue to do so after your divorce.  Contact Schwartz | White for a consultation.