Does A Prenuptial Agreement Always Mean A Painless Divorce? 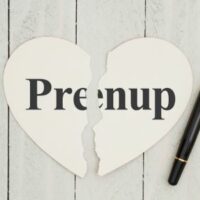 Dividing a deceased person’s property is much easier if the decedent wrote a will.  Likewise, dividing a couple’s property is much easier if the couple signed a prenuptial agreement before they got married.  Of course, that is a cynical way of looking at things.  Everyone who is born will eventually die, but not every couple that gets married will eventually divorce.  Some people might argue that signing a prenup is always better than not signing one, because it requires you to be honest with your spouse about money.  While discussing your financial goals, debts, and financial values with your spouse is always a good idea, some couples need prenuptial agreements more urgently than others.  For example, if your student loan balance exceeds your annual income, you need a prenup; the same goes if you have children from a previous marriage and want to avoid an inheritance dispute in the future.  Perhaps the most important reason to sign a prenup is if you and your fiancé each separately own businesses that frequently fluctuate in value.  If you are an entrepreneur about to become half of a power couple, a Boca Raton prenuptial and postnuptial agreement lawyer can help you draft a prenup that will help you keep the peace whether or not your marriage lasts.

The Best-Case Scenario: A Prenup So Complete That It Facilitates an Uncontested Divorce

Perhaps you have heard the news; Tom Brady and Gisele Bundchen have just had the perfect divorce.  The couple married in 2009, when they had already established illustrious careers in the NFL and modeling, respectful; before they did, they signed a prenup designating their respective business interests as non-marital property.  During their 13 years of marriage, Brady’s net worth grew until it surpassed $300 million, and Bundchen’s exceeded $400 million.  Last month, Bundchen filed for divorce in Glades County, and Brady did not contest the divorce petition; the court finalized their divorce on the same day.  Presumably, before they filed the divorce papers, they had already agreed on the division of their marital property.  Brady is keeping the mansion, still in the works, on Indian Creek Island, while Bundchen has two other properties in South Florida.  It is unclear how they agreed to divide their other properties, which are in New York, Montana, the Bahamas, and Costa Rica.

What Can Go Wrong With a Prenup?

As with any legally binding agreement, loopholes can sink a prenuptial agreement.  If there is ambiguity about whether a certain asset is marital or nonmarital, then there can be as much conflict over division of marital property as if you had not signed a prenup.  Likewise, questions over the validity of the prenup can be a source of conflict.  Before you sign a prenup, both spouses should meet with lawyers separately to review it.

A South Florida family law attorney can help you draft a prenuptial agreement that will prevent conflict about assets and debts belonging to both spouses going into the marriage.  Contact Schwartz | White in Boca Raton, Florida about your case.