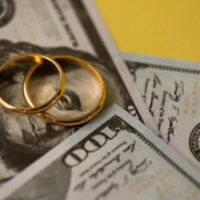 Marriage counselors will tell you that having a professional life and recreational interests separate from your spouse and their job and hobbies, but for the most part, the parties in lasting marriages see themselves as a team.  You and your spouse might have separate bank accounts in addition to your joint account, and you might have a policy of each party not asking the other how much money they spent on Buffalo wings or premium apps, but both spouses spend their income for the good of their joint family.  There are very few families where Mom’s annual income is equal to Dad’s annual income penny for penny, but constantly holding it over your spouse’s head that you earn more is a recipe for resentment.  Even if you and your spouse honored your commitment not to keep score about financial contributions to the marriage, if you get divorced, the court will put in writing what percentage of the financial support each parent is responsible for paying.  If you and your spouse had a way of dealing with your unequal incomes during your marriage but are now going through an uncomfortable reckoning during your divorce, contact a Palm Beach County divorce lawyer.

When Elisia and Felix divorced in 2010, their children were minors, and the court awarded 57 percent of the parenting time to Elisia and 43 percent to Felix.  When determining child support, it awarded Elisia 80 percent of the financial responsibility for the children and Felix 20 percent, which meant that Elisia had to pay Felix $592.00 per month in child support.  It based the decision about financial support of the children on the parties’ incomes.  Elisia was a manager at a company that operates a large chain of retail stores, and Felix was a nursing assistant, so Elisia’s monthly salary was about four times Felix’s.  For this reason, Elisia had to pay Felix some equalizing payments as part of the parties’ equitable distribution scheme.

The contentious issue in their divorce case was not about their salaries, but rather about the other perks of Elisia’s job.  While the divorce was pending, Elisia received $46,000 in bonuses from her employer.  Felix argued that these should be classified as marital assets and subjected to equitable distribution.  Elisia argued that the bonus money should not count toward equitable distribution, since she spent it all on child support and attorneys’ fees during the divorce; the court accepted her argument.  The court also divided Elisia’s credit card debt, and Felix argued that about $1,300 of the debt should not be divided, because it represented business travel expenses for which Elisia’s employer had reimbursed her.  As per Felix’s request, the court did not divide that portion of the debt.

A Boca Raton divorce lawyer can help you divide your marital property equitably, even if a substantial portion of it is in the form of job perks.  Contact Schwartz | White for help today.