If You Reviewed Your Prenuptial Agreement With A Lawyer Before You Signed It, The Agreement Is Probably Valid 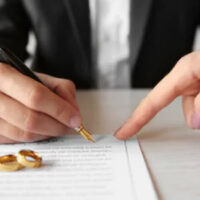 Florida’s equitable distribution laws, where the court divides marital assets in the fairest possible way, but not exactly equally, enable the courts to decide, on a case-by-case basis, what is fair for each couple.  In practice, the court is not usually the one that decides.  Most couples agree on how to distribute their property either before they file for divorce or during mediation.  It is more common for judges to sign off on marital settlement agreements submitted by the couple, with or without the help of a mediator, than to decide which party gets which assets and which debt obligations.  If the couple has a prenuptial agreement, the court almost always follows the provisions of the prenup, even if it is not how the judge would prefer to divide the couple’s property.  The court will only refuse to enforce the prenup if it was signed under duress or fraud, or if it is unconscionable, meaning that enforcing it would leave one spouse so poor that they would have to rely on public assistance.  A Palm Beach County prenuptial agreement lawyer can help you persuade the court to enforce your prenup or not to enforce it.

No One Is Destitute After Receiving a $1.9 Million Divorce Settlement

A decision issued by the Florida Supreme Court in 2015 demonstrated a preference for upholding prenuptial agreements as long as the parties entered into them willingly, even if they leave one spouse substantially less wealthy than the other.  When Harry and Dianne married in 1986, she was 28 years old and he was 46.  They signed a prenuptial agreement designated the wealth that Harry generated from his business ventures during the marriage as his separate property.  Before they signed the agreement, both parties reviewed the agreement with their respective lawyers.  Throughout their 22-year marriage, Harry’s real estate empire grew until it included the Boca Bridge Hotel on East Camino Real.

Harry filed for divorce in 2008, when he was 68 and Dianne was 50.  They went through a protracted battle over whether to enforce the agreement and how much money each party should get.  Dianne argued that the argument was unconscionable, because it left her with only a small fraction of the family’s wealth.  The Florida Supreme Court ruled that the agreement was valid because Dianne had entered into it willingly and had understood that it would mean she would end up with a lot less money than Harry if the parties divorced.  The Supreme Court further reasoned that, after receiving a $1.9 million divorce settlement, Dianne was wealthy by objective standards, even if she was less wealthy than her former husband.