Prenuptial Agreements For The 99 Percent 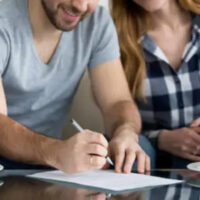 Marriage Is a Contract, Anyway

Prenuptial agreements mean that you are serious about marriage, not that you have cold feet and are anticipating a divorce.  There are virtually no legal obstacles preventing unmarried couples from living together; therefore, the ones who sign prenuptial agreements are the ones who want to be legally married, not simply to be together.  An increasing number of Americans will be in debt for the foreseeable future; a world where everyone is in debt is the only situation that today’s young brides and grooms have ever known.  Prenuptial agreements can address which debts are separate and which ones are marital, just as they do with assets.  A main motivation of young people in signing prenups is to protect each spouse from the other’s premarital debt.  Some couples also sign postnuptial agreements when one spouse borrows a large sum of money during the marriage.

Do You Need a Lawyer to Draft Your Prenuptial Agreement?

Today’s couples who sign prenuptial agreements are honest with themselves about the financial risks to which they would be exposing themselves and their spouses if they did not sign the prenup.  Many of them are under no illusions about being able to pay a family law attorney to draft a prenup.  Online services such as HelloPrenup enable couples to draft their own prenuptial agreements from digital templates.  Whether you need a lawyer to help with your prenuptial agreement depends on the complexity of your financial situation.  It is probably safe to draft your prenup without a lawyer’s help if all you are saying is that neither spouse shall bear any responsibility for each other’s student loans during or after the marriage.  If it is more complicated than that, you will probably need a lawyer.

A South Florida family law attorney can help you draft a prenuptial agreement that protects you and your fiancé from each other’s financial liabilities.  Contact Schwartz | White in Boca Raton, Florida about your case.