Same Sex Couples, Make Your Parental Relationship to Your Parent’s Children Official Through Marriage or Adoption 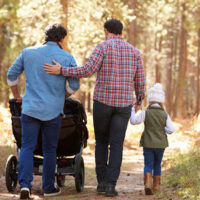 In most child custody cases, the deciding factor on which all other factors in the decision rely, is the child’s best interest.  The court can forbid a parent from moving out of Florida, or even forbid you from spending time alone with your child, if this is most conducive to the child’s physical and emotional wellbeing.  Of course, the law also takes a parent’s legal right to make decisions about his or her children seriously.  The court will not interfere in your decision to enroll your children in a public or private school or to homeschool them, to participate in your faith community with your children, or allow your children to play competitive sports.  If someone wants to override any of your decisions about your children, they will need to persuade the court that your actions are contrary to your children’s best interests.  Of course, these rights only apply to legal parents.  If you are not the child’s birth mother, then the only ways to become a legal parent are to have been legally married to the birth mother at the time of the child’s birth or to legally adopt the child.  Female partners of birth mothers of children born before Florida began to recognize same-sex marriage face an uphill battle in gaining recognition of parental rights.  If you are a woman raising your wife’s biological children, you should check with a South Florida child custody lawyer to see if the law recognizes you as a legal parent of the children, and if it does not, you should start the adoption process.

Vivian and Gisela were a couple for ten years; their entire relationship took place before Florida law began to recognize same-sex marriages.  In 2009, Gisela gave birth to a daughter.  The child had Vivian’s last name, but Gisela was the only parent listed on the birth certificate.  Therefore, Gisela was the child’s only legal parent.  Before their relationship ended, both women took a parental role toward the child.

When the parties separated in 2013, Gisela legally changed the child’s last name to match her own and blocked Vivian from having any contact with the child.  Vivian filed a petition in which she cited six legal arguments as to why the court should safeguard her continuing relationship to the child.  The court denied her requests.  Since Vivian was not the source of the oocyte that contributed genetic material to the child, did not give birth to her, and did not legally adopt her, she had no standing as a legal parent.  In the decision, the court explained that the “psychological parent” doctrine that courts relied on in previous cases could no longer serve as precedent.  More recent case law has shown that a legal parent’s right to privacy supersedes the emotional needs of a non-parent adult who has played a major role in the child’s life.

Don’t assume that, just because Florida recognizes same-sex marriage, you are free from any problems that would require the services of a Boca Raton child custody attorney.  Contact Schwartz | White for help with your case.