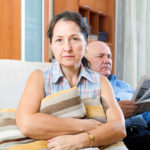 Some Considerations When Getting Divorced Later In Life

Gray divorce refers to divorces involving older couples who have been married for a long time before deciding to go their separate ways. There are many reasons couples may wait until their twilight years before filing for divorce. It could be that the couple decided to wait until the children were older and moved… Read More »

The Rise of the Gray Divorce

Sharon and Ozzy, Kris and Bruce, Danny DeVito and Rhea Perlman. These celebrities spent a majority of their lives together, but then split when people thought that they had truly made it. Whereas divorce has become increasingly common in the past decade, it was not until very recently that divorce amongst older couples –… Read More »

Divorce is no longer for the young and immature. The rate of divorce amongst couples age 50 and older – in 2009, it was at a rate of 1 out of every 4 divorcing couples – has doubled in the past 20 years. The trend in the number of baby boomers divorcing later in… Read More »