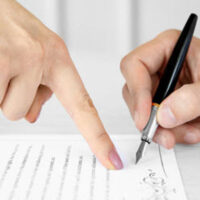 Yes, It Is Legal for Your Spouse to Sponsor Your Immigration Without a Prenup

Paul and Magda met in 2001 on a dating website called Latin Connection.  Paul was 41 years old and divorced; he lived in Florida, and his net worth was about $4 million.  Magda was an 18-year-old college student in Colombia.  Both were observant Christians in search of a spouse, and Magda wished to immigrate to the United States.  They relied on translation apps to communicate, because Paul did not speak Spanish, and Magda spoke very little English.  Paul visited Magda on several occasions when his work brought him to Colombia.  During one of their visits, Magda lost her virginity with Paul and became pregnant.  In August 2001, Paul paid for Magda to have an abortion, without her family’s knowledge; they were strict Catholics who strongly disapproved of premarital sex and abortion.  During this same August 2001 visit, Paul made an immigration appointment for Magda at the embassy and scheduled a civil wedding in advance of the appointment.  Their church wedding took place several months later, had to fulfill several requirements in order for the Catholic Church to perform the ceremony, since he was a Protestant whose previous marriage had ended in divorce.

Just days before the civil wedding, while Magda was still recovering from the abortion, Paul presented Magda with a prenuptial agreement and told her that signing it was a requirement for her immigrant visa application.  The agreement was in English, and Magda brought it to a lawyer who had a translation company translate it into Spanish, but the lawyer did not know enough about United States law to know that Paul’s claim about prenups being a requirement for spousal visas was not true.  Wishing to marry Paul and fearing the consequences if her family found out about her abortion, Magda signed the agreement.

After their marriage, Magda and Paul lived in Florida and had five children together.  In 2017, Magda filed for divorce.  Magda argued that the prenup, which left her at a great financial disadvantage, was not valid because Paul had lied about it and exploited her vulnerability, and she had not had a chance to investigate matters thoroughly with her lawyer.  The court agreed that Paul’s lies amounted to fraud and that the circumstances amounted to coercion, and it determined equitable distribution as if there had been no prenuptial agreement.