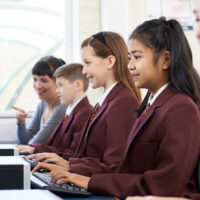 If you have never been divorced, you might be surprised about the length and hair-splitting level of detail in Florida parenting plans.  They cover every possible point of disagreement between divorced parents regarding where children spend their time and which parent has the authority to make which decisions regarding the parenting plan.  Parenting plans specify which parent has the final say about the children’s participation in extracurricular activities, how the children will travel from one parent’s house to the other, and even which means of communication (such as text messages, emails, or divorce-specific messaging apps) the parents will use to discuss co-parenting issues.  Parenting plans do not, however, deal with financial issues; these must be addressed in the divorce judgment or child support order.  Enrolling children in private school is both a co-parenting issue and a financial decision.  Therefore, documents other than the parenting plan must address which parent is responsible for which school-related expenses if the parents choose a private school for their children.  Contact a South Florida child custody lawyer for help resolving parenting disputes related to your children’s private school education.

LaShawn Harris and Feaster Hampton divorced in Michigan; by 2006, after their divorce, they had both separately relocated to Florida.  They participated in mediation in Florida in order to adapt their parenting plan to Florida law.  In mediation, they agreed that they would send their son to Flamingo Road Christian School and that it was LaShawn’s responsibility to enroll him in school.  The court signed the mediation agreement into a court order, stating that LaShawn must enroll the child in Flamingo Road Christian School by the end of January 2007.

When LaShawn failed to enroll the child in the school by the specified deadline, Feaster filed a motion to hold her in contempt of court, including a brief jail sentence if she failed to comply with the provisions of the contempt order.  LaShawn filed an appeal, arguing that she had not willfully disobeyed the court order; rather, it was not feasible to comply with it.  The court had not specified in detail which parent was responsible for what portion of the school tuition and other school-related expenses, such as uniforms and textbooks.  The appeals court ruled in LaShawn’s favor.  It remanded the case to the trial court to determine how the parents would share responsibility for the child’s private school tuition and other school-related expenses.

Just because you and your ex-spouse agree that you want your children to attend a private school, the possibilities for disagreement do not end there.  A Boca Raton child custody lawyer can help you resolve disputes related to school choice, tuition payments, and other school-related issues.  Contact Schwartz | White for help today.